One-Pot Zuppa Toscana Soup is a copycat recipe of my favorite soup at Olive Garden. It has a creamy broth that is loaded with sausage, potatoes and kale. Call it your new wintertime favorite!

If you are looking for the perfect side to go with this Zuppa Toscana Soup Recipe try making these amazing garlic knots. It is the perfect soup side dish recipe!

Zuppa Toscana simply means – Tuscany Soup, Tuscany being a region in Italy. Thanks to Olive Garden Restaurant, it became quite popular both in the restaurant and out.

For years, my family and I had a tradition of going to the Olive Garden on Sundays to get bottomless soup, salad and breadsticks. Each of us would order bowl after bowl of the Zuppa Toscana. There were even times when we would get a gallon of soup to-go. I know, we were absolutely obsessed! I eventually came to the realization that we needed to figure out how to make the soup at home.

After some trial-and-error, I think I nailed it! Follow the directions below and bring restaurant quality soup to your dinner table.

Bread to Serve with Zuppa Toscana

There is little better than the joy of sopping up delicious soup broth with a good hunk of bread. Here are some of my favorite bread recipes to pair with Zuppa Toscana:

Zuppa Toscana Soup requires little ingredients despite its complex flavor. Italian sausage, sliced potatoes, heavy cream, beef broth and kale come together in a large pot to make a soup that is so comforting and hearty.

The best (and most convenient!) sausage to use for Zuppa Toscana is ground Italian pork sausage. It’s typically pre-seasoned with fennel, garlic and herbs, making your life a bit easier. When I am in the mood for an extra kick of heat, I will add some crushed red pepper flakes.

Zuppa Toscana is a great meal prep recipe. Double or triple the recipe and have it on hand throughout the week. The kicker? Zuppa Toscana gets richer in flavor as it marinates in itself in the fridge.

Despite Zuppa Toscana being a great candidate for refrigeration, it doesn’t hold up so well in the freezer. As a general rule of thumb, soups made with cream and potatoes tend to not freeze great. The cream will separate and change the texture of the broth. And when reheated, the potatoes will often turn the soup to mush.

Store Zuppa Toscana in an airtight container in the fridge for up to a week. When you are ready to reheat, use a saucepan at medium heat or zap it in the microwave.

Bread & salads are always a good option to serve along side soup. I’ve already recommended Garlic Knots, but, here’s a few other recipes I recommend serving with this warm Zuppa Toscana Soup Recipe:

Before you begin cooking, I recommend that you read over the printable recipe and prepare your workstation. My personal preference is to prep all vegetables at once so I can just add to the pans/pots as needed to cook.

While your broth is coming to boil, you will prepare your skillet and saute down the onions and garlic. Those will be added to the broth while you add the sausage to the skillet to saute until cooked through. Following the directions below, add the sausage and potatoes to the broth mixture and cook until potatoes are tender. Add remaining ingredients as directed and serve.

One-Pot Zuppa Toscana Soup is a copycat recipe of my favorite soup at Olive Garden. It has a creamy broth that is loaded with sausage, potatoes and kale. Call it your new wintertime favorite!

Percent Daily Values are based on a 2000 calorie diet. 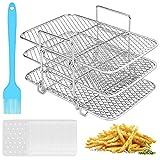